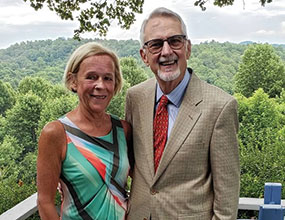 In his personal and professional life, Bob Hunter exemplifies the values of excellence and service at the heart of a Manhattan College education. His talent, knowledge, and integrity have propelled him to national and even international success.

Bob came to Manhattan from Archbishop Stepinac High School in White Plains, New York, the starting place for many outstanding Jaspers. After earning his diploma in 1961, Bob planned to join the workforce like many of his peers. He never contemplated attending college. His father completed his education with high school and his mother with grammar school.

However, an Oxford-educated English teacher at Stepinac, Father John Mulroy, changed his fate. Father Mulroy pushed hard for Bob to attend college. Bob initially considered West Point since he was greatly influenced by The West Point Story, a television series that ran from 1956 to 1957—plus it was free! However, Father Mulroy landed a spot for him at Manhattan in the fall class of 1962, and he became a Jasper.

There was no such thing as dormitories back in the day, so Bob rented a basement room on Irwin Avenue in the Bronx with everything he needed—cooking facilities and a private bath. His landlords, Mr. and Mrs. Garcy, were Holocaust survivors. They charged him a $1 day and never increased the rent during all the years he lived in their home. Through various part-time jobs and summer employment, he could manage the $1 day rent, meals at home, and the $25 per credit tuition at Manhattan.

Bob initially studied chemical engineering and credits these classes with building his analytic thinking. After two years, he switched to the business school and found his passion in economics. While attending Manhattan, he always worked and married before graduating. He then continued his studies at Columbia University earning a master’s in finance.

His career started at Chase Manhattan, which after just a year led to a position in Brazil for three years. He returned to New York City in 1971 and eventually headed back to London in 1976 where he served as the Area Executive for Europe. After leaving Chase in 1996, where as Senior Executive Vice President he headed Global Consumer Services, Bob returned to London as CEO of Barclay’s Global Wealth Management where he remained until his retirement in 2003.

Bob, who is a former Trustee, together with his wife Marie, are donors to the College and members of the Covenant Society. Manhattan changed the arc of his life, and he will be forever grateful.

“Manhattan gave me a thirst for learning—it turned on a light that didn’t exist before,” Bob exclaimed. “I read dozens of books a year.” He has cultivated an interest in art history and currently serves on the Board of The John and Mabel Ringling Museum of Art. He is the proud father and grandfather of four children and seven grandchildren.

Though he calls Sarasota, Florida, and Asheville, North Carolina, home these days, Bob’s ties to the Riverdale campus remain strong—as does his support for the transformative role Manhattan College continues to play in so many young lives.